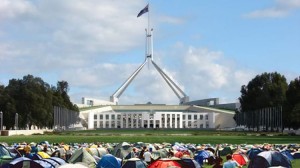 Libs to provide SHELLter to all.

Questions were asked last week following the confirmation that pregnant women under 30 would not be exempt from the government’s plan to strip Newstart allowance recipients of their benefits for six months at a time, prompting fears that young, pregnant women would be forced into poverty.

The Liberal government’s “earn or learn” policy aims to encourage young unemployed people to either get a job or seek further education instead of, as Liberal MP Ewen Jones put it, “playing bloody Nintendo” (Mr Jones later retracted his statement after figures provided by Microsoft showed that the X-Box was the “dole bludgers’ console of choice”).

This follows reductions to pensions and other allowances, and the upcoming removal of the Family Tax Benefit Part B for all families with a youngest child over the age of six.

However, the government has now revealed that these changes are all part of a plan to improve the availability of affordable housing by forcing more people into homelessness.

Minister for Social Services, Kevin Andrews, stated today that there was plenty of housing; the problem was that people were already living in it.

“By encouraging the closure of our local manufacturing businesses, thus reducing the ability for the average Australian to earn a living, and by reducing the financial support given to welfare recipients, we will move towards a state in which many will no longer be able to pay their rent or mortgage and will be forced into homelessness.”

“This will make more housing available and bring rents down, making it simpler and more affordable for those who do have jobs to find somewhere nice to live.”

“As for all slack, X-Box playing bludgers out there, we’re funding the development of a self-contained living space that is worn on the back and which can be pulled forward over the head to encompass the entire body. We envision that at the end of a long day applying for jobs, a young, unemployed person could find a spare patch of grass and curl up for the night quite comfortably.”

“We’re thinking of calling it a SHELLter. Tony’s daughter came up with that name. Good, eh?”

The unit will apparently come with a battery that outputs just enough power to run an X-Box.

“Yeah, whatever, sounds OK to me,” he stated.

When asked whether the design and manufacturer of the SHELLter would create any local jobs, Mr Andrews replied that in line with new Liberal party supply policies, the work would be done overseas in order to lower costs.

“This will ensure we give maximum value for money to the Australian taxpayer. Then we’ll have enough money left over to supply all homeowners with brooms for sweeping all the homeless people off their lawn every morning.”

“Can’t have those buggers lying around playing Call of Duty all day and impregnating women under 30 — I’ve heard they don’t do so well under some of our new proposals.”