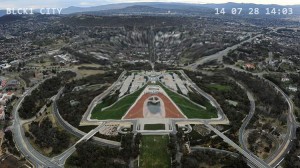 The worrying effects of political density.

Australian scientists have raised concerns over the Liberals’ proposed job seeker policy, suggesting that its extreme density may warp or even damage the fabric of the universe.

Scientists have stated that the problem first arose on May 13, as the Liberal’s budget was being delivered. Measuring devices at various universities and private research groups recorded random changes in the fabric of space above Parliament House, suggesting that there was something very dense in the vicinity.

“We suspect the combined unleashing of several policies worth of dense thinking was enough to increase local gravity and cause some distortion to the fabric of space,” said Dr Tony Hockman of the ANU’s Research School of Physics and Engineering.

“The problem has grown considerably since that time, reacting to the government’s handling of asylum seeker issues and to various cuts made to health services.”

The key factor now, however, seems to be the job seeker policy, which will force those receiving the dole to apply for two jobs every working day. The policy has come under fire from various groups for the pressure it will place not only on job seekers but on businesses forced to respond to thousands of additional job applications from unqualified applicants seeking to fill their quota.

“Following Employment Minister Eric Abetz’s appearance on Lateline a few days ago, when he stated that fewer and fewer available jobs meant that job seekers should apply for more and more, the distortion measured in the space above the ABC’s Canberra studios was quite concerning.”

Scientists have so far been hesitant to detail what the full effects of such density could be, but it has been suggested that in an extreme case the formation of a black hole could not be ruled out.

“Needless to say, the effects of such an outcome would be catastrophic,” stated Dr Thomas.

“For the sake of humanity, the Liberal government needs to stop being so dense.”