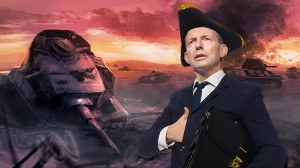 Prime Minister Tony Abbott escalated his targeting of the ABC (the so-called “War on Error”) today, calling for a combined arms incursion into ABC territory and suggesting that a nuclear strike was not out of the question.

Trouble began for the ABC on 22 June following their inclusion of former terrorism suspect Zaky Mallah on their Q&A program, where he confronted junior minister Steve Ciobo about the government’s changes to citizenship laws.

Mr Mallah, who had previously stated that teenagers who travel to Syria to join the terror group deserve to be “locked up”, suggested that the attitudes and actions of such ministers were justifiably prompting some to take up arms with the Islamic State.

The ABC immediately received a storm of criticism for its decision to allow Mr Mallah to speak on the episode.

Mr Abbott’s initial response was to suggest that “heads should roll”, and to ask the national broadcaster, “Whose side are you on here?”

“I’m not saying the ABC is in favour of terrorism,” Mr Abbott later clarified, “but the more terrorism there is, the more bad stuff there is for the ABC to write about, so I have my suspicions.”

The ABC apologised for what it agreed was an error in judgement but steadfastly refused to behead any of its employees, deeming it an “over-reaction” and pointing out that such an action would contravene employment laws in several states.

“People should be able to voice opinions, but not opinions that are too different from the correct one.”

“But more than that, I believe that mistakes, which the ABC have clearly made here and which I have never made, should be punishable to the full extent of my imagination.”

ABC Managing Director Mark Scott made a brief appearance at a media conference last week wearing a ghillie suit, his face daubed in camouflage paint, entering the stage under cover of a flashbang grenade.

“If Abbott wants us, he can come and get us. He’ll never take me alive!” he advised.

The Murdoch press, which in 2013 instructed the Australian public who they should vote for in the federal election, has since run multiple stories decrying the flagrant abuse of the freedom of the press.

“This is not an ‘us and them’ article,” began one such item which ran in Thursday’s Daily Telegraph, “but us would just like to point out that them done wrong.”

There was also much discussion of the issue in parliament on Friday, where Mr Abbott suggested that they may have to “nuke the ABC from orbit.”

“It’s the only way to be sure,” he stated sombrely.

Mr Abbott has also promised that a full and impartial inquiry would be made into Q&A, which he impartially referred to as “a Leftie lynch mob”.

He also told Q&A that none of his friends were allowed to play with it any more, and that its mother was not as pretty as the other mothers.

It’s possible that action may also be taken against other networks that are perceived to have stepped out of line after Mr Abbott this week made passing suggestions that he would have the SBS put on a boat and taken back to where it came from.