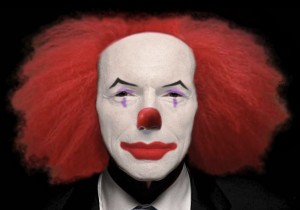 Tony Abbott: founded on the
principles of laughter

Tony Abbott confirmed today that under the provisions of the recent federal budget, schools would have the option of hiring a clown to cheer students up but would not have the option to hire any other sort of counsellor or youth worker.

“There is a crisis in today’s youth,” Abbott stated, “and I believe this can only be solved with laughter. If kids are feeling down, they don’t want to talk about their problems with a so-called ‘mental health professional’; they just want to feel better. They want simple, straightforward answers, not ambiguity. I feel that our $245 million Clowns for Schools program is exactly what’s needed.”

The program has come under fire for its rigidity, with Greens senator Christine Milne stating that an “overly simplistic, one-size-fits-all approach” was not a suitable solution.

“Young people today face issues that are much greater in complexity than ever before. To suggest that a half-hour balloon animal session will fix things is ludicrous. But aside from that, some people don’t even like clowns. Not everyone finds clowns amusing. Sometimes, in movies, clowns kill people. Is Mr Abbott trying to give us nightmares?”

When asked why schools would not be allowed to choose how they provided counselling services to their students, Mr Abbott responded that Australia was “founded on the principles of laughter.”

“It was how I was raised; it worked for me and I believe this is the right thing to do. Do you know why cannibals don’t eat clowns? Because they taste funny. There, don’t you feel better?”