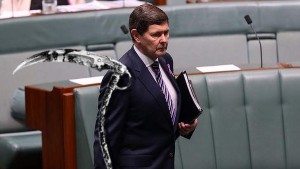 Kevin Andrews: There are options

Young unemployed people facing the prospect of receiving no dole for six months should simply learn to absorb nutrients from the air, according to Social Services Minister Kevin Andrews.

“Evolution does give them that option.”

It was revealed as part of the recent federal budget that from 2015, people up to 30 years old will have to wait six months for an unemployment benefit.

Mr Andrews, who, according to his Facebook profile, kicks puppies for pleasure, stated that the best way to avoid unemployment was to get a job.

“I have personally known a few people who were unemployed; then they got a job and they weren’t unemployed any more. Problem solved.”

When it was pointed out that some people would undoubtedly find hardship under such a plan, Mr Andrews suggested that they could “suck it”.

Mr Andrews said that people should not hold out for their “dream job” but should do anything that might be available, such as sweeping chimneys, carting night soil, or being a lamplighter or bowling alley pinsetter. Mr Andrews also pointed out that his shoes could do with a shine.