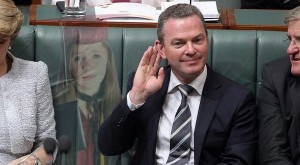 Debtfinder Pursuivant Pyne:
No trail is too cold

Under radical new plans announced by the Liberal party today, séances will be used to recover new student loan interest debts from the dead.

From June 2016 the government plans to charge interest on student debts at the 10-year bond rate (up to 6%) rather than the consumer price index (currently 2.9%). As a result, Australians who finished university courses in recent years will face extra interest payments on their existing student loans.

This would include students who had taken out a loan, finished a course and then died.

The movement is being led by Minister for Education (and now Debtfinder Pursuivant) Christopher Pyne. Mr Pyne is currently assembling a crack team of mediums who will be dedicated to the task of recovering new debts from recently departed students.

“The government sees no reason why a debt should be forgiven just because a student has died,” stated a Liberal party spokesperson. “We are also looking into other ways of applying this principle, such as recovering family debts retroactively, through past lives. The potential for debt recovery is practically limitless.”