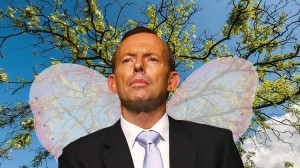 Prime Minister Tony Abbott made the announcement at a small media conference this morning, following mounting pressure to make an official statement on the subject.

Although Australia is due to attend a major global climate summit in Paris at the end of the year, the Abbott Liberal government had so far refused to reveal Australia’s official post-2020 emissions reduction targets.

The only other country still yet to declare its position is Japan, though they have already made strong suggestions as to what their commitment would be.

Since a 2013 discovery by Japanese scientists conclusively linking whale populations to carbon emissions, Japan has vowed to strengthen its tackling of emission reductions in this area.

Australia, however, had made no statement as to its intent until now.

“Other countries have made these airy-fairy power commitments, which just gives you some idea of their approach to the issue.”

“But regardless, when we make a commitment to a certain reduction, we stick to it.”

“So we, the Abbott Liberal government, run by Tony Abbott, which is me, are committing to a reduction of -5% by 2025. Pinky swear.”

“And that’s a promise, with our current policies, we feel confident we can keep.”

The Abbott government’s efforts are expected to receive a boost by the recent move in which Treasurer Joe Hockey and Finance Minister Mathias Cormann told the $10 billion Clean Energy Finance Corporation (CEFC) to stop investing in wind power projects.

Instead, they have been asked to use surplus wind turbine blades to dig a hole in their backyard to see if there’s any coal buried there.

“With our recent decisions to put a stop to all wind and solar power projects, we are already looking at a -2% reduction by 2016,” Mr Abbott stated.

“That’s real progress towards our target.”

“With new projects and funding for the coal industry, including the sale of Queensland to mining conglomerate Adani, we can really get some runs on the board.”

Opposition leader Bill Shorten, when asked about Mr Abbott’s statement on a -5% reduction, spent several minutes scribbling figures on a napkin and looking confused before excusing himself.

He issued an official response shortly afterwards stating that he didn’t think that’s what trees were saying.

He also later made the point in parliament that any figure announced in Paris would first have to be converted to French numbers as “things worked differently over there”, and that it wasn’t clear how this would affect Australia’s emission reduction strategy.

Mr Abbott stated that Australia was even willing to give other countries some assistance if they needed it.

“In many cases, it’s simply that other governments don’t have the same grasp of mathematics as we here in Australia do under our current education system.”

“I read recently that Denmark now generates 140% of its power needs with renewable energy. They obviously don’t realise that you can’t have more than 100% of something; it’s simply not possible.”

“But I’d never poke fun at our backward global neighbours; instead, I’m here to help them see the light.”