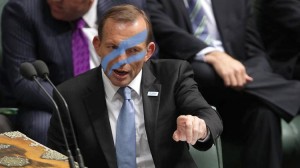 “They can never take my desire to take their freedom.”

Prime Minister Tony Abbott has faced a popular backlash over his recent comments on Scottish independence.

The Scots will go to the polls on September 18 to answer the referendum question: “Should Scotland be an independent country?”

In a recent interview with the London Times, Mr Abbott said: “What the Scots do is a matter for the Scots and not for a moment do I presume to tell Scottish voters which way they should vote. But Freedom? It brings nothing but heartache and suffering. What the Scottish need is an imperial yoke under which to strain. Do the Scottish even know that Braveheart was just a Hollywood movie?”

“The people who would like to see the break-up of the United Kingdom are not the friends of justice, not the friends of freedom. I’m talking about you, Scotland. Not a single ideological concept will want to be friends with you. Certainly not awesomeness.”

Mr Abbott’s comments are in line with his government’s other freedom-related policies, such as reducing the ability of the unemployed, the disabled and the elderly to be active and happy members of society, and locking up asylum seekers with minimal process and no transparency.

“They can never take my desire to take their freedom,” he added with a wink.

Mr Abbott further stated that although he is, in general, a fan of Mel Gibson, he felt that Braveheart was somewhat over-rated.

“Give me Mad Max any day,” he stated.

It’s also understood that the Prime Minister’s office received a cautionary visit from the Irony Police, who issued him with a formal warning over his implication that independence was the opposite of justice and freedom.