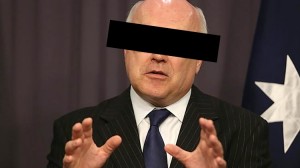 In a fitting move, Attorney General George Brandis has demonstrated his technological aptitude by delivering a meta-interview on the topic of metadata.

Mr Brandis was interviewed on Sky News in an attempt to clarify details of a new government plan that would require telecommunications companies to retain metadata on its customers’ activities for two years.

Instead of going down the usual path of providing copious amounts of accurate and relevant detail, Mr Brandis delivered information in the form of meta-answers, to best demonstrate how metadata works.

When asked whether social media networks would be included in the plan, Mr Brandis Liked the question, and a record of his Like was immediately forwarded to ASIO where it was misinterpreted as possible terrorist activity.

There was, of course, the unspoken question of whether any metadata on Australian citizens would be passed on to US authorities.

Despite the question remaining unspoken, the NSA later assured the press that it wouldn’t.