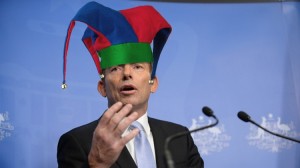 The Liberal party has announced a campaign to raise public awareness of Opposite Day, celebrated nationally each year on the 6th of September.

Until now, Opposite Day has enjoyed a high level of recognition and celebration by children but has been largely shunned by adults as being childish or even misleading, but a recent wave of reporting on remarks made by Tony Abbott before the 2013 election has catapulted the national event back into the public eye.

Malcolm Turnbull said on Tuesday that Tony Abbott’s pre-election promise not to cut the budgets of the ABC and SBS had been misinterpreted as it had been made on the 6th of September.

“I wouldn’t have thought that our national media, who are always very much on the ball, would need reminding that this is Opposite Day,” he said.

“Tony has always been a keen proponent of Opposite Day, it being something of a family tradition, and we’ve always encouraged him in that, but the public’s lack of awareness on this issue is really starting to cost him.”

A look at some of Mr Abbott’s most repeated comments over the last few years shows that Opposite Day has not been kind to him.

It was on 6 September 2009 that Mr Abbott called the argument behind climate change “absolute crap”.

September 2012 was free from controversial public statements, though Mr Abbott was heard to remark in casual conversation that he didn’t actually like Speedos that much.

In 2013, Mr Abbott made his famous “promise” not to cut funding to public media.

In a radio interview yesterday, Finance Minister Mathias Cormann stated that far from being ignorant, stubborn, stupid or evil, Mr Abbott was often merely the victim of bad timing and misinterpretation.

“We’re all a bit tired of having Tony’s comments taken the wrong way; what we’re calling for here is greater public awareness and acceptance.”

“We’re planning a six million dollar campaign across all media, focusing on television and radio, to raise public awareness so that remarks made on that date in future years will not be misunderstood.”

“Seriously: shirtfronting Putin? On what date do you think Tony made that threat?”

“You can be certain he was really, really careful about the timing of that one.”