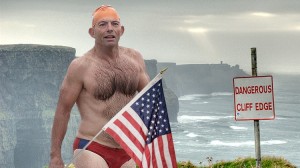 Concreting the US’s position in the Pacific.

Prime Minister Tony Abbott’s general willingness to comply with US political requests was put under the microscope this week with the announcement that Australia would help transport arms and military equipment to Kurdish Peshmerga fighters in an attempt to counter the advance of Isis in Iraq.

The government also hinted there may be further Australian involvement, including the use of fighter planes in air strikes.

The decision to become involved in Iraq came in response to a request from President Obama made with the support of the Iraqi government, and the announcement prompted opposition leader Bill Shorten to ask several questions in parliament, including whether Mr Abbott was Mr Obama’s girlfriend.

Independent MP Andrew Wilkie put forward the supposition that if Mr Obama asked Mr Abbott to jump off a cliff, he would do that, too, although Mr Abbott later assured parliament that that was not the case.

However, this morning brought the news that Mr Obama has indeed asked Mr Abbott to jump off a cliff.

Mr Obama stated that Mr Abbott jumping off a cliff, holding an American flag and a bag of cement, would “further concrete the US’s position in the Pacific”.

It remains unclear whether Mr Abbott will comply with the request, and the office of the Prime Minister has not yet released a statement on the matter.

It is understood, however, that they have received more than fifty thousand offers to pay for the cement.