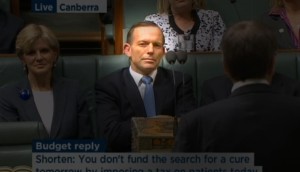 Opposition leader Bill Shorten’s budget reply speech of May 15 was notable for many reasons, none more so than an unexpected surprise from Prime Minister Tony Abbott: a new facial expression.

Slotting in between Abbott favourites, “Distant Smugness” and “Casual Loftiness”, we’ve now been introduced to what is sure to become a fast crowd favourite, “Distracted Superiority”.

Waiting until a key moment in Shorten’s speech, the Prime Minister casually let the new expression drift over his face with no prior warning or indication of what was about to happen.

Mike Bowers, of the ABC’s Insiders program, referred to it a master stroke of political strategy.

“You can see he’s a bit worried at this point, and then– ‘Oh, what’s that interesting thing over there? Sorry, Bill, I wasn’t listening to what you were saying, I guess it can’t have been important!’. Brilliant stuff from the master.”

Asked his opinion on the ABC’s Lateline, Christopher Pyne uttered an irritating, high-pitched warbling noise, but no-one in the studio was able to work out what he was trying to say.

Political steadfast Laurie Oakes opined that it was “vintage Abbott”, and “perhaps the key to lifting the troubled Libs from their post-honeymoon doldrums.”

Footage of the expression change is already circulating heavily on social media networks and YouTube.