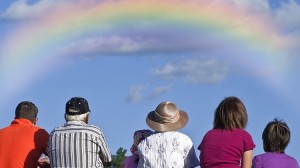 Organisers of an anti-gay rally yesterday were flummoxed by the appearance of a rainbow over their rally point.

Organisers said that a morning shower at the rally point in the outskirts of Brisbane had initially caused a brief delay in the assembly of protesters, but that as a modest crowd finally gathered, a rainbow ceremoniously appeared overhead.

“It has put a bit of a dampener on things and raised some concern,” said one organiser, “especially for some of the older, more conservative people. Some of them are quite religious and the appearance of the rainbow has caused a bit of confusion; they’re not sure whether it’s some kind of sign, and if so, what it’s supposed to mean.”

The rally was organised in response to a new opinion poll suggesting that public support for gay marriage in Australia had reached 72% and support for a conscience vote on the issue 77%.

Rally organisers later asked the media not to publicise any images of the rally in case the presence of the rainbow caused the public to misinterpret it as a pro-gay rally.

“It’s a bit of a shame as publicity was obviously the whole point of the exercise, but we don’t want people to get confused about what our message is,” stated an organiser.

Prime Minister Tony Abbott, whose sister is openly gay, has previously stated that he has no intention of being swayed from his conservative viewpoint on the issue.

“From time immemorial in every culture that’s been known, marriage, or that kind of solemnised relationship, has been between a man and a woman. And like our understanding of science, I don’t see why the conclusions people reached 2,000 years ago should change now.”