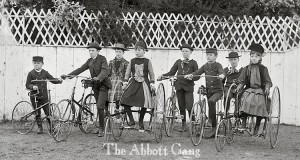 The Abbott Gang:
mayhem on the streets

Word on the political grapevine today is that Malcolm Turnbull has taken his ball and gone home, leaving the other Liberals with no game to play.

The trouble started when Turnbull, a high-up in the Abbott Gang, sat and ate his lunch with Clive Palmer one day last week, a move which some of the other kids in the gang saw as an affront to their leader. Although Turnbull assured them he meant nothing by it and that he was “just being friendly”, some of the louder lieutenants of the gang, Andrew Bolt and Alan Jones, started making fun of Turnbull, suggesting that he was a bit of a girl and that their dads could beat up his dad any day of the week.

When goaded into responding to these statements, Tony Abbott suggested that Turnbull should “pull his head in” and stop hanging out with the unpopular kids. Bolt and Jones (AKA “The Trouble Brothers”) reportedly responded with choruses of “Yeah, Turnbull, pull ya head in!” and “dack him!”

Accusations are now being made that Turnbull is angling to take advantage of Tony Abbott’s absence (he’s staying with his Aunt for a couple of days due to troubles at home) and assume the leadership of the Abbot Gang, a rumour he continues to deny.

Events came to a head yesterday afternoon when, after continued teasing in the playground, Turnbull grabbed his ball in the middle of a game and stormed off home, leaving the other Liberals with nothing to do for the rest of the day. The Trouble Brothers then chalked “Turnbull is a poo” on the playground asphalt and were given detention.

It remains to be seen what will happen when Abbott returns from his Aunt’s house but shoving one or more members of the gang into the girls’ toilets has reportedly not been ruled out.