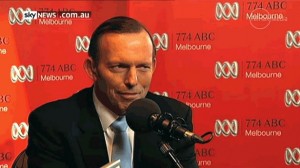 Abbott on the air — and in the gutter

Abbott fielded a call from an irate pensioner (“Gloria from Warburton”) who informed the Prime Minister that she had resorted to working on a phone sex line in order to make ends meet.

Abbott responded by asking, “Really? What are you wearing?”, which he then followed with approximately 20 seconds of hooting and catcalls.

Being filmed at the time, Abbott can then be seen remembering the presence of the camera and recomposing himself.

A ministerial press secretary later clarified that what Mr Abbott had actually said was, “Really? I am very sorry to hear that. What can I, as Prime Minister, do to help you?” and that what sounded like hooting had actually been various comforting noises of sympathy and understanding.

This is not the first time Abbott has been in hot water over his apparently sexist and misogynistic behaviour. When asked by anchor Sandra Sully in 2012 what his favourite sport was, he winked, responded, “Motorboating”, and proceeded to dance around the room, thrusting his pelvis at strangers. When asked by a reporter in 2013 why there were so few women in politics, Abbott responded, “It’s a simple physiological limitation; medical science has now proven that when women think too hard, their brains overheat and they develop brain fever.”

A spokesperson for the Prime Minister’s office told Amanda Jackson of The Australian that Mr Abbott should not be held accountable for the misinterpretations of his behaviour by others, especially stupid bitch reporters.