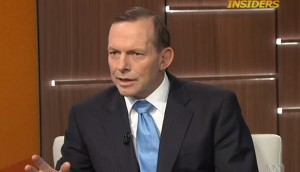 Questioned about budget cuts by interviewer Fran Kelly during his appearance on ABC’s Insiders program this evening, Prime Minister Tony Abbott touted his contribution to bolstering the Australian national identity.

“We’re a nation of battlers, Fran,” he said proudly, “and it’s pretty obvious that you can’t be a battler if you haven’t got a battle to fight. If things get too easy for the average family, what’s going to happen? They’ll lose their sense of national identity.”

“We all need to contribute, Fran; we all need to sacrifice. I’ve put a freeze on politicians’ pay rises just to show that I’m in the same boat as everyone else. My salary was due to rise from $496,000 to $505,500 this year and now… Nothing. I’m going to be sitting on $496,000 for the next 12 months. And it hurts. But I’ll tighten my belt. I’ll share the load. Because I’m an Australian, Fran; I’m a battler. And the harder I battle, the more Australian I am. Unlike Climate Change, it’s an obvious and proven correlation.”

When asked whether the cuts presented a more practical, financial concern for Aussie battlers, Abbott chuckled, in that understanding, good-natured way your mate might.