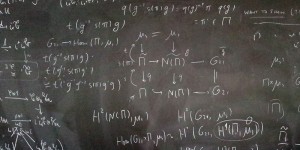 Treasurer Joe Hockey held a brief press conference this afternoon to further clarify the effects of the cuts and taxes detailed in the recent budget.

According to Hockey’s theory, Australians don’t need to be concerned about the planned cuts or taxes as they simply cancel each other out.

“Sure, we’ve got a few new taxes,” he said, gesturing passionately to a small but keenly interested press corps, “but what’s the opposite of a tax? The opposite of a tax is a cut. A tax is about giving, a cut is about taking away. Here, I’ll show you.”

Mr Hockey then took to a blackboard to illustrate the movement of money throughout the Australian economy.

“Mary is on an average income and has two kids. She now pays $7 to see the doctor, and that’s a– well, it’s not really a tax but we’ll call it a tax. And then, see, Mary loses her Family Tax Benefit Part B, and that’s a cut. The two opposites cancel each other out. So, really, Mary’s situation is no different than before.”

When asked how this system would affect higher income earners, Hockey positively glowed with pride.

“Our system of taxes and cuts gets even more efficient when you apply it to higher income earners. Rather than applying the taxes and cuts separately, you do it all in a single step, and simply cut the tax. Again, you’ve got a ‘tax’ in there and you’ve got a ‘cut’ in there, so they just cancel each other out. It’s just so elegant.”

The Treasurer then called a stop to the press conference as he had to go and have a lie down.

It is understood that Mr Hockey has further press conferences scheduled at which he will cover other advanced economic concepts such as imaginary crises.