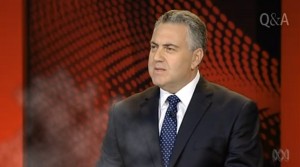 A fire crew was called to Joe Hockey’s interview on ABC’s Q&A program on Monday night after the Treasurer’s pants spontaneously burst into flame mid-sentence.

Hockey was fielding a question from host Tony Jones as to whether any election promises were broken with the release of the budget when, shortly after answering in the negative, flames erupted from the lower extremities of his pants and smoke quickly engulfed the stage, forcing an abrupt halt to the interview.

While Hockey attempted to extinguish the flames by rolling around on the stage, Jones began smothering him with a large cushion, before quickly being restrained by studio security.

A fire crew was called to deal with the incident as the fire extinguisher normally kept in the studio had been removed the previous day due to recent budget cuts.

It is not yet known what caused the Treasurer’s pants to combust; a police investigation is ongoing.