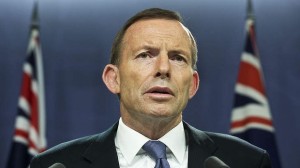 Abbott on the warpath
Source: AFR

Prime Minister Tony Abbott today condemned the “cowboy antics” of Nielsen Poll, who he says has “blackened his good character with lies.”

“I don’t know who this joker Poll is and he hasn’t had the guts to confront me himself, but you can’t just go around saying bad things about people without there being repercussions,” stated Abbott, referring to headlines in national newspapers today reporting Nielsen Poll’s opinions of his leadership following the delivery of Abbott’s maiden Liberal budget.

Specifically, Mr Poll claims that disapproval of Abbott as Prime Minister is now up to 62%, though it is not clear how he might have arrived at such a figure.

Neither is it clear who Nielsen Poll is or what his involvement in Australian politics might be. A Liberal spokesperson stated that the hiring of a private detective had not yet been ruled out.

“The office of the Prime Minister has the full intention of taking this matter as far as it can go,” confirmed the spokesperson this morning.