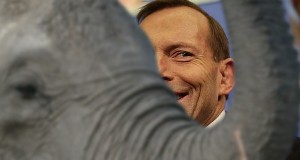 Prime Minister Tony Abbott has denied that there will be any elephants present for his upcoming talks with US President Barack Obama.

“They wouldn’t even fit on the plane,” he said in response to an opportunistic question from a reporter earlier today.

Abbott is due to meet Obama for private talks when he visits the US in June, his first visit to that country as Prime Minister.

“I hear all this drivel about how there’s going to be a climate change elephant in the room when President Obama and I meet, and it’s just not on the cards,” Abbott retorted. “Are they saying that elephants cause climate change now?”

“I can assure the people of Australia that I take this meeting very seriously and there will be no elephants of any kind involved. We’ve also had no indication from the Americans that they have any plans to involve elephants.”

Abbott did admit that there was an elephant in the room when he met with Indonesian president Susilo Bambang Yudhoyono on his visit to Jakarta in September 2013, when the issue of “turning back the boats” was a hot topic.

“But it’s Indonesia,” Abbott explained. “They have a lot of elephants over there.”