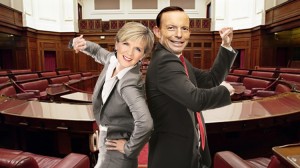 Abbott: Lightning on his feet.

Prime Minister Tony Abbott has sought to reinvigorate his party with an end-of-year cabinet shuffle.

In a surprise move, Sussan Ley has been made Minister for Health, thereby doubling the number of women in the upper ranks of the Abbott ministry.

Mr Abbott indicated that as the new minister is a woman the portfolio would be renamed accordingly, from “Health” to “Cooking and Owwies”.

Former Health Minister Peter Dutton was supposed to be made Minister for Immigration but due to a mistake of his own making has instead been transported to Nauru. He has reportedly been attempting to inform the government of the error via a Department of Human Services call centre but it’s understood he has been on hold for the last three days and the situation remains unresolved.

Scott Morrison, in his new role as Minister for Social Services, has already announced sweeping changes to government processes.

As of 1 January 2015, all pension, carer and disability claims will be processed offshore, with applicants held in government accommodation for up to 80 days while their applications are considered.

After 80 days, all applications will be assigned a status of either “improperly completed”, “misfiled” or “burned” and applicants will be held indefinitely, until the staff eventually grow weary of their presence and send them home again.

The long-term or permanently disabled will be given a new safety net, which will be suspended beneath them after they are made to get back to work, in case they fall over.

A swearing-in ceremony was conducted this morning in which Mr Andrews was asked whether he trusted the government-owned Australian Submarine Corporation to build a canoe, to which he responded, “I do”.

Tony Abbott stated that he was inspired to “mix things up a bit” by Assistant Treasurer Arthur Sinodinos using some of his accrued annual leave.

“The people of Australia will be glad to know that all the bad feelings they were having about the government were simply due to the fact that people were “sitting in the wrong seats,” as it were. It’s kind of a Feng Shui thing. Now everyone is where they should be and the country can resume its unanimous approval of what the Liberal party are doing.”

“Look, the opposition goes on and on about the apparently “unfair budget” but if you rearrange the letters of “unfair budget” you get “Tony’s a great Prime Minister” — it’s true, and you don’t even have to cut any letters out. No cuts at all, I promise.”

“It’s clearly a sign that the coming year will be one of great achievements for the Liberal party and for the Australian people.”

“And you know, the great thing about “doing the cabinet shuffle” is that it’s not a real dance, so you can’t actually tread on any toes,” stated the (continuing) Minister for Women.