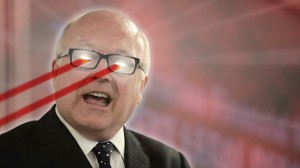 Director-General of Security and head of ASIO (the Australian Security and Intelligence Organisation), Major General Duncan Lewis, stated today that while ASIO appreciated the additional powers granted to it by the recent National Security Amendment Bill, he was concerned that they went too far.

“We’re always keen to find more and better ways to keep our country secure but now we can basically spy on whoever we like, whenever we like: with a single warrant we can collect data from the entire internet; we can plant software on peoples’ computers, delete their data… Anything, really, and not be held legally accountable for any of it.”

“It’s not even my birthday,” he added in confusion.

Despite concerns from the Greens and some elements of the Labor and Liberal parties, the bill passed successfully through the senate late last week. There are fears that the new laws will have a “chilling effect”, discouraging whistleblowers, journalists and activists from reporting abuses of power, as doing so would now place them under threat of incarceration.

“It’s not that I agree with this idea that these powers will be abused,” stated Major General Lewis. “We’re all extremely honest, well-adjusted people here at ASIO, with perfectly sound judgement that never falters. We never get tired, never hold grudges, aren’t affected by emotion or ambition and are completely incorruptible. And above all else, we prize freedom. As long as it’s appropriately regulated and controlled. And as long as you’re not a weirdo.”

In response to arguments from those opposing the bill, Attorney General George Brandis stated that anything he personally disagreed with was simply a red herring designed to delay or confuse the lawmaking process, that he would not waste time explaining why he was right, and that anyone questioning the fairness of the new laws would be locked up and possibly incinerated.

In an interview on Radio National yesterday, Major General Lewis stated, “It’s wonderful that the country has now adopted a position of fearful compliance but on the whole I think it would be nicer if we just went back to the powers we had before, which were simpler and not quite so scary.”

“Now, if that’s all, I’m heading home to sever my internet connection and retreat to my bunker; it’s the only way you can get any security and privacy these days.”