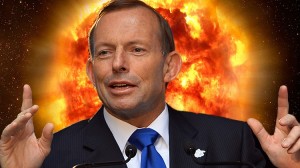 Prime Minister Tony Abbott has renewed his commitment to axe the Renewable Energy Target (RET), warning that continued and excessive use of solar power will gradually deplete and eventually destroy the sun.

The RET has succeeded in reducing Australia’s dependence on fossil fuels, decreasing the average household’s energy bill, creating jobs and encouraging international investment, but Mr Abbott has now warned that the continued drain on the sun’s energy may cause it to burn out as soon as 2050.

“There’s no such thing as an infinite resource and it’s unfortunate the previous Labor government didn’t think of that,” stated Mr Abbott, weeping gently into a handkerchief.

“The panel I had appointed to deliberate on the fate of the RET, composed of highly qualified climate change skeptics, pro-nuclear advocates and fossil fuel lobbyists, were all set to announce that we should stick with it.”

“Now, however, it seems as though it’s simply too dangerous. The time has come for the hippies of the radical left to put away their reckless ideologies and listen to the science: continued use of solar power will make the sun implode.”

Independent modelling found that the removal of the RET would mean a loss of $10.6 billion in investment and an annual carbon emission increase of 15 million tonnes, with no drop in energy prices to consumers. Despite this, Mr Abbott is committed to removing it completely.

“Future generations will look back at this turning point and be thankful that we made the right decision,” Mr Abbott stated.

“And we won’t just be saving the sun. Think of all the air we’ve lost to wind turbines. It’s time for this reckless use of our natural resources to stop.”

The government did announce, however, that they are considering the continued, controlled use of hydroelectric power to combat rising sea levels.

“We do understand that the air is going to be more polluted with all the extra coal we’ll have to burn but there’s just no avoiding that: clean air does not simply grow on trees.”