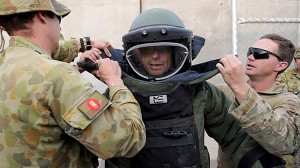 Mr Abbott prepares to interact with a woman.

Prime Minster Tony Abbott raised his personal Threat Level to “Alright Looking” late Sunday afternoon, following the news that he would be touring a factory at which, rumour had it, a woman was employed.

Mr Abbott was briefed by advisers shortly after receiving the news and was informed that women were “similar to men but not quite the same”.

He was also assured that women enjoyed beer and sharing jokes about toilets as much as he did.

The tour went well until he was brought into proximity to the woman, who was busy assembling parts at an assembly line station.

Although his tour script called for him to engage the woman in casual conversation about her role in the business, he appeared somewhat flustered by the meeting.

Mr Abbott is seen nodding to the woman several times before laughing awkwardly and smiling, and it appears as though he deviated somewhat from his prepared statement.

It’s understood that the Prime Minister was then driven home, where he had a cold shower and a lie down.

Mr Abbott made an informal statement indicating that the government had no further plans to encourage the employment of women in productive capacities as it was “confusing”, although this change in policy is yet to be officially confirmed.