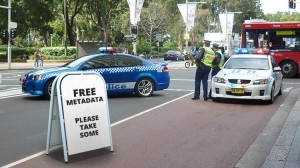 The Australian Federal Police have announced that they have successfully concluded a trial metadata leak in preparation for new metadata retention laws.

The trial leak project, which has now been running for several years, involved the accidental publication of sensitive metadata from AFP criminal investigations on government websites.

The aim of the project was to ensure that sensitive information on Australian citizens could be efficiently and effectively leaked once proposed new metadata retention laws were in place, and that there would be nothing to stop the accidental publication of large quantities of data.

“We now have a good indication that we are one hundred percent ready to cope with the scaling up of metadata collection,” he said.

“The successful conclusion of this operation means that we are in a good position to quickly and effectively leak massive amounts of sensitive information on Australian citizens when the time comes.”

While the government continues to argue that the retention of telecommunications data is necessary for law enforcement and intelligence agencies to effectively conduct investigations, they have failed to put forward comprehensive explanations on such issues as how metadata will be collected and stored, what it will be used for, and what metadata actually is.

“All we know for sure,” stated a government spokesperson, “is that it involves clouds. Now, there’s nothing wrong with clouds. Sometimes they look like rabbits or big fluffy sheep. As usual, the civil liberties princesses are over-reacting. Rabbits and sheep are not scary. Not even the big ones full of data.”