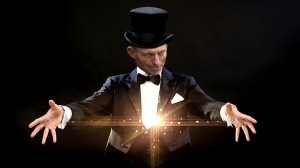 Australia: now you see it…

Rumours abound today that Prime Minister Tony Abbott may be taking a break from politics to take his magic act on the road later this year.

Mr Abbott has been spending recent months honing his skills, first among these being his ability to make things disappear.

In performances that would dazzle Chriss Angel and David Copperfield, Abbott has performed public disappearing acts on government contracts for Australian businesses, consumer savings from the repeal of the carbon tax, funding for environmental programs and education, and universal healthcare.

Most notably, Mr Abbott has wowed spectators in the past few weeks with his ability to make political asylum seekers disappear without a trace, closely followed by international goodwill towards Australia.

“Really, it’s all in the wrist,” Abbott said at a press conference this morning, spontaneously producing a dove from his inside coat pocket.

When asked by a journalist about the negative consequences of making so many important and useful things vanish, Mr Abbott produced a dozen roses from his sleeve, placating the questioner.

Mr Abbott, with the help of his first budget, is currently in the middle of what he calls his “toughest challenge yet,” that of making the entire middle class disappear.

Abbott has also begun teaching his tricks to apprentices Joe Hockey and Christopher Pyne, who have been helping their master cause the disappearance of voter confidence.

It remains to be seen which tricks Mr Abbott has left up his sleeve and whether he can magically reverse his current polling trend.