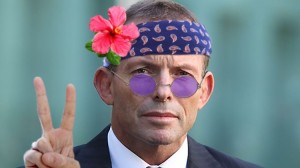 Resting lightly on the planet.

The UN World Heritage Committee has rejected the Liberal Government’s bid to reopen 74,000 hectares of Tasmania’s world heritage area to logging by conservationists.

Prime Minister Tony Abbott told reporters in Canberra that he was “disappointed with the decision, for the sake of the planet.”

“Man and the environment are meant for each other. People who work with timber, who work in forests, are the ultimate conservationists. If we want to genuinely improve our environment, we need to make the most of it. In short, we need to get in there with some bulldozers and tractors and conserve the sweet Mary out of that forest.”

Abbott’s views on forestry echo comments he made to a minerals industry event in May when he said that leaving coal in the ground was one of the most damaging things imaginable.

“Coal is a beautiful, natural thing. It should not be left buried under tons of dirt — don’t you dare tell me it deserves that. It should be dug up so that we can properly appreciate it; refined and enriched so that it is made more beautiful; and finally gifted, in return for a small donation, to other countries so that all the peoples of the Earth can share in the bounteous beauty of nature.”

Mr Abbott expressed his hope that the Liberals’ other conservation plans, such as the dumping of dredging material in the Great Barrier Reef Marine Park, would be allowed to bear fruit.

“It’s only through the mixing, the intertwining if you will, of all the elements of Mother Earth that we can help our planet fulfil its destiny. We should spread this beauty throughout the world in the name of the greatest power of all: love. By which I mean, responsible economic management.”