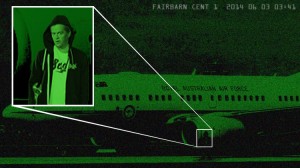 Mr Abbott was due to leave from Canberra early yesterday morning for talks with Indonesian President Susilo Bambang Yudhoyono later in the day, in an effort to improve relations. However, Mr Abbott’s jet refused to start, delaying the trip for several hours. In the end, a replacement jet had to be brought in.

Security footage from the airport shows a hooded figure tampering with the engines of the plane the day before Abbott’s flight. Although the person seen in the security footage does bear a resemblance to Mr Shorten, a Labor spokesperson dismissed the claim as ridiculous, stating that, “Mr Shorten does not own any clothes with anywhere near that amount of street cred. He is not even sure what a ‘hoodie’ is.”

Mr Shorten made a brief reference to the accusation today, advising Mr Johnston not to “get all up in my bizzle.”

After visiting Indonesia, Mr Abbott is due to travel to France for the 70th anniversary of the D-Day landings, then to Ottawa for business meetings, and finally to the United States to meet with Barack Obama.

“My message is that Australia is open for business,” said Mr Abbott in a statement yesterday. “This was the message that was first carried to France by our troops during the D-Day landings. They went there to tell France — and Germany, who happened to be there at the time — that Australia is open for business. I follow in their footsteps, delivering this same message to the simple yet noble peoples of Ottawa, and to President Obama, whose children I would gladly bear if so requested.”

Investigations into the sabotage continue.