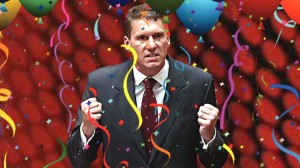 Bernardi was fielding a question from a member of the audience on the Liberal party’s proposed school chaplaincy funding, which he answered with an offhand swipe at the previous government’s policies. At that moment, klaxons sounded and a shower of balloons and confetti fell from the ceiling in celebration of the milestone.

Bernardi was apparently wholly unprepared for the honour.

“I never thought for a moment it would be me who kicked the winning goal,” he said after the show. “I always figured it would be Tony [Abbott] or Joe [Hockey]; they’re the ones out there, day in, day out, doing the work and setting the example. I’m stoked, I really am.”

The audience was initially unsure what was happening but after host Tony Jones explained the significance, they responded with a warm round of applause.

“I’d generally had a pretty low opinion of Mr Bernardi up until now,” said a member of the audience after the show, “but I have to admit, this changes my view of him somewhat. I guess maybe he is an achiever after all. You certainly can’t question his dedication to his party.”

Jones said production staff had prepared for the big event as it was known that the Liberals were getting close to the milestone.

“We had a meeting beforehand and the executive producer said, look, they’re sitting on 999,972 — there’s a pretty good chance they’ll hit the big one during our show. So we had everything ready just in case, and it’s a good thing we did.”

When asked about his next ambition, Bernardi gave assurances that two million wasn’t out of the question.

“I’m aiming high and I plan to win — unlike the previous Labor government!”