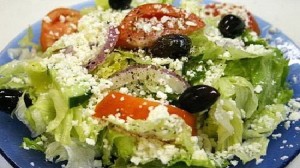 Controversy has again surrounded Prime Minister Tony Abbott’s daughter Frances following an incident in which she returned a partly eaten salad due to it being “not salady enough”.

It is understood that Ms Abbott ordered a Greek salad from a Brunswick Street delicatessen and had consumed approximately a quarter of the dish before deciding that it was not to her liking.

Sources state that Ms Abbott phoned her food advisor, the head chef at New Parliament House in Canberra, to ask his opinion on the salad. The two spoke for approximately 20 minutes before Ms Abbott hung up, returned to the deli counter and requested a refund.

The deli owner then enlisted the help of a passing police officer, pointing out that there was nothing wrong with the salad, that Ms Abbott had known in advance what ingredients would be in the salad, and that Ms Abbott had accepted the salad as presented, paid for it, and indeed, had partly consumed it.

It is understood that Ms Abbott responded by pointing out that she was the Prime Minister’s daughter and as such had come to expect a certain level of quality and freshness in her salads, and also that the salad had obviously been made with too much Feta. She said that she had not cleared the salad with her food advisor beforehand as she had “wanted to be independent”.

The police officer then agreed that there was indeed an unreasonable quantity of Feta in the salad, and ordered the delicatessen owner to refund $6.50 of the original $8.50 purchase price.

“Really, I could have taken some of the Feta out,” said the delicatessen owner in a statement to the media, “or Ms Abbott could have realised before she ordered it that, actually, she wasn’t that keen on Greek salads.”

A lawyer for Frances Abbott stated that it was unreasonable for the vendor to have expected Ms Abbott to pay for the salad in the first place.

“Ms Abbott is accustomed to receiving things such as salads, jobs and tertiary education for free; it was quite distressing for her to be asked for payment and hopefully it’s something that won’t happen again.”