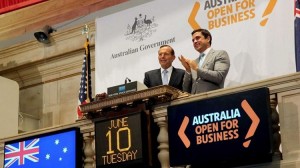 Tony Abbott has spent the first day of his visit to the United States endlessly repeating the same phrase over and over again, prompting fears that his software may be glitching.

Abbott visited the New York Stock Exchange on Tuesday morning, ringing the bell to signal the start of trading. He stopped to give a short speech to those present.

He then fielded some questions about kangaroos and was asked the meaning of the word “clobber”.

Abbott closed off the day with a private dinner with Rupert Murdoch, where it is thought his software was tweaked and he was given his operating instructions for the next twelve months.

Abbott’s biggest challenge in the next 24 hours will be his meeting with president Barack Obama, where differences of opinion on Climate Change could be a potential stumbling block. The US last week committed to its power sector reducing carbon emissions by 30% on 2005 levels by 2030, while Australia’s own commitment is considerably weaker.

“Some people believe that this is an issue that needs to be taken seriously,” said Abbott yesterday. “Personally, I don’t even think it exists. But I’m a politician and if a lot of people say the same thing, no matter how nutty it is, I have to at least pretend to listen, otherwise I won’t be re-elected. I only hope I’ll be able to convince president Obama that we’re really on the same page.”

Mr Abbott was then taken back for another brief visit to Rupert Murdoch’s house.

“I don’t think there’s any argument that climate change is a serious issue,” Abbott clarified later in the evening, “we just need to figure out the best way to tackle it. Open for business.”