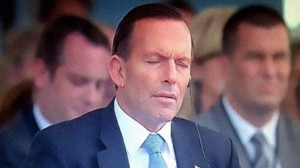 A misinterpretation by Tony Abbott has resulted in a brief but unscheduled snooze during a D-Day remembrance ceremony.

Abbott, who is currently in France reminding the French that Australia is Open For Business®, attended a remembrance ceremony in Normandy to commemorate the 70th anniversary of the D-Day landings.

Part-way through the ceremony, French President François Hollande called for a minute’s silence to mark the occasion. Unfortunately, Abbott misheard and thought the President had requested a minute’s somnolence, at which point he promptly dozed off.

A Liberal spokesperson admitted the gaffe, stating that the extreme emotion of the occasion had affected the Prime Minister’s senses, but added that Abbott had drifted off “in the most respectful and culturally sensitive way possible.”

Abbott followed up his visit to France with a quick trip to Canadia. After executing a secret handshake with Canadian Prime Minister Stephen Harper, both men discussed their plans to boost the underwater jobs sector by encouraging sea levels to rise.

Abbott is then due to meet with US President Obama where, he said, he will discuss the “Five I’s”. Abbott stated in an interview this morning that he knows the first four are India, Igloo, Iris and Indigo but he can never remember what the last one is.