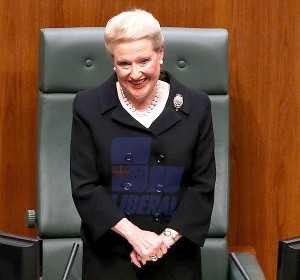 Responding to recent criticism, the Speaker of the House of Representatives, Bronwyn Bishop, has denied she has any bias towards the Liberal party.

Bishop, who was a Liberal party senator between 1987 and 1994, and who has been a Liberal party representative since 1994, was given her current position by Liberal Prime Minister Tony Abbott in 2013. She stirred up controversy recently by hosting a Liberal party fundraiser in her parliamentary suite, which was decorated liberally with her favourite colour, “Liberal Blue”.

“I carry out my job in an unprejudiced and unbiased manner,” she maintained in a statement released yesterday. “Whether I am dealing with the ugly, brutish oiks from the Labor party or the dazzling and graceful talents from the Liberal party, I do not and will not take sides.”

When it was pointed out that every single one of the 99 MPs she ejected from the House during a recent one-month spree were Labor representatives, she defended her record by stating that “Labor representatives, much like the lower primates, have trouble limiting their behaviour,” and claimed they brought it upon themselves by continually and flagrantly asking the Prime Minister questions.

“I will not have that on my watch,” she stated defiantly.

There are now calls from Labor for Bishop to be removed from her position, or at least made to stop conducting drive-by eggings of Labor representatives’ houses.

ASIO Insists New Laws Give It Too Much Power