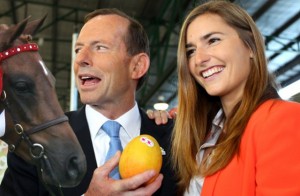 Some doubt: A girl and her pony

Controversy has erupted surrounding the pony obtained by Frances Abbott during her time at the Whitehouse Institute of Design.

At the time, Frances Abbott claimed that the pony was a wild animal who had simply “wandered in” to her class one day, and which had seemed happy enough to stay.

However, various witnesses have now come forward to state that they saw a trailer delivering the animal to the Institute, complete with stall, feed and stable boy.

Frances Abbott’s classmates, none of whom managed to attract wild ponies, suggest that the fact that Frances was Tony Abbott’s daughter may have had something to do with her supposed good fortune.

“I did everything I could do, within my means,” said one student who preferred to remain anonymous. “Every night I laid out apples, sugar cubes and fresh hay, and not a pony in sight. How is it that the Prime Minister’s daughter happens to attract a wild show pony? Coincidence?”

The Institute claims that they had no knowledge of any ponies, and indeed would have had trouble telling a pony from a horse unless the two were standing right next to each other.

The pony (“Princess”) has not yet responded to press enquiries.