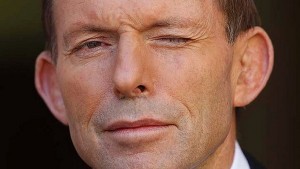 As part of a broad restructuring move, Prime Minister Tony Abbott announced today that the office of Minister for Women will now be known as Minister for Chicks.

“It’s shorter, it’s catchier, and I think it better reflects this government’s progressive and enlightened approach to dealing with womens issues,” said Abbott after the announcement.

“It’s part of our job, as representatives of the people, to stay in touch with the feelings and attitudes of society,” continued Abbott.

“The females in our society no longer want to be burdened with an outdated moniker that has a lot of baggage attached to it; they want something new and shiny and sparkly that keeps them peppy while they go about their daily household chores.”

An anonymous source who contacted us directly stated that Abbott himself had originally proposed the name “Minister for Alright Looking Chicks” but that this was felt to be too cumbersome.

It came as a further surprise to learn from this same source that the reason why Australia has no Minister for Science is because top Liberals couldn’t agree whether the office should be called the Minister for Geekiness or the Minister for Nerdity.

It was agreed, however, that the job should be given to someone with the name “Poindexter”.