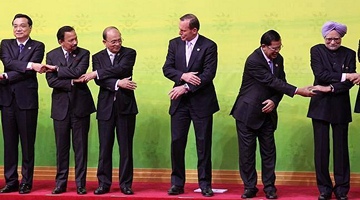 It’s a little known fact that all that hand-shaking isn’t just for show: politicians must regularly shake hands in order to discharge any build-up of negative political energy in their bodies, or risk a potentially catastrophic meltdown.

Unfortunately, Tony Abbott skipping the UN Climate Summit in September caused a major build-up and it’s now resulted in him giving out a massive burst of negative political energy.